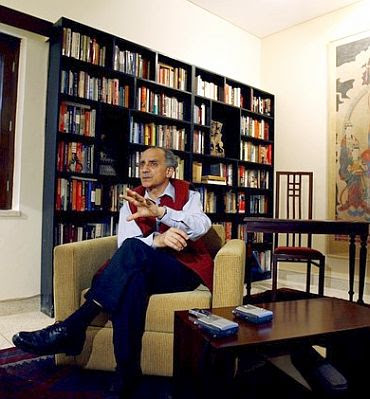 In part one of this interview, Arun Shourie, former newspaper editor, twice member of the Rajya Sabha, former Union minister, right-wing thinker and author, explained the minefield of the 2G spectrum scam and the Niira Radia tapes. Part I: 'BJP and Congress are one party'
In the concluding part of the interview with Rediff.com's Sheela Bhatt , he explains why Sonia Gandhi and Manmohan Singh are losing control over the government and the Congress party.
One of the issues revealed in one of the Radia tapes is that you were not given a chance to speak on a Budget-related issue in Parliament.
In her conversation with N K Singh, a former bureaucrat and now a Janata Dal-United MP, she says she didn't want you to be given a chance to speak by the BJP (Bharatiya Janata Party).
Did you discover the alleged pressure on your party from the tapes or did you know about it before?
Do you think corporate people can influence the BJP?
Why don't you listen to the tape? I was astonished when I reached Parliament that day. But what can you do? I didn't know that such pressure had worked.
I don't blame the corporates as much as the political process and then these lies are being put out (in defence by the BJP).
And my friend N K Singh says this was a social chat. Arre, look at your tone. You are talking for nine minutes to Radia. Out of that for five minutes he speaks on how he was successful in subverting the BJP's speakers in the debate on the Budget.
N K Singh now says he rejected the proposal that favoured Mukesh Ambani's Reliance when he was revenue secretary.
How interesting! Then what about the tape? This concession (to Reliance's gas project) was made by (Union Finance Minister) Pranab Mukherjee.
A revenue secretary, who has written some clarification, overruled this concession. (N K Singh says on the tape) 'We have to get it restored, otherwise we are nowhere. The initiative they have taken will go nowhere.'
Therefore, Arun Shourie who has taken the difficult position in the BJP's party meeting, has to be managed, he says. He then says, we have got Venkaiah Naidu to speak first.
Somebody has analysed Venkaiah Naidu's speech, in which the sentence is there (supporting Reliance) that all these tax concessions must be continued and given for the gas infrastructure. Where is the doubt?

That's why you are saying that the BJP and Congress are the same.

From all sorts of circumstances. Why is the investigation into the IPL (Indian Premier League) not being pursued? Because you find the same group (the Congress and the BJP) is everywhere.
It is now only the pretence of the government and the Opposition. Actually, they are the same.
Unless, the people of India wake up these things will go on. No issue will reach its conclusion. This is cancer. This is not a scandal.

Have you seen a detailed debate on Indian defence, on the dangers that India is facing from China?

When I was writing on it three years, five years and even ten years ago about China they would say 'paranoia'! I wrote on Islamic terrorism, about Pakistan.

Have you seen anybody taking up these issues in New Delhi? Television will debate the issue to find out who is responsible.
Someone says Nehru, some will say Indira Gandhi, some will blame (P V) Narasimha Rao or Manmohan Singh. The debate is over and now let's go and see Shilpa Shetty!
That's the problem! Just drama that is going on and on. Inside Parliament, it is arranged drama.
You have heard the 100 plus Radia tapes uploaded on the Outlook Web site. It gives us an insight into India 2010. It's a very important insight. That's why I am urging people please, please listen to it. I am urging people to please publish verbatim.
Please bring out books. Please bring out CDs and reproduce it. So, that people would know how things are managed in government, in the Opposition and in the media.
How polices are being made, how personnel are being fixed. It's a wonderful glimpse. We owe a great degree of thanks to Niira Radia, and, to the persons who recorded these calls and to the person who leaked it.
And, a very important point: These tapes also show the power of the Internet.
Apart from Open and Outlook, the whole print media blacked it out, but Internet users had perseverance. The Hindu has taken it up now. Individual journalists like Girish Nikam and others are pursuing it. Now, the tapes have got some focus.
What has surprised you in Radia's conversations?
Nothing has surprised me. This is what I have been saying since long is the state of affairs. That is now confirmed by these tapes. This is not the state of affairs of India. The Radia tapes reveal the state of affairs in New Delhi.
When you were a journalist and a top editor, you shifted to politics.
In those years when you were moving from media to politics, obviously, even your phone call would suggest that you crossed that red line. Don't you think so?

Did you ever think that Radia would be so powerful?

I thought she was an articulate lady. I never thought that she knows everybody -- very effective in her job. We can't blame her.

What's the solution for the Indian media?

First, the media should write about itself. It is extremely short-sighted about the media to black out these things. The Mitrokhin Archives (external link) revealed how (the then Soviet intelligence agency) the KGB boasted that they were able to plant 400 stories in such and such Indian newspapers.
The Indian media blacked it out. Then, privatetreaties.com (external link) of The Times of India that other people have now adopted has been completely blacked out.
Only two, three journalists are exposing it on the Internet. Again, on the issue of paid news, only P Sainath of The Hindu wrote about it.
When the Press Council of India was forced to appoint a committee to look into the allegations about 'paid news', the Press Council itself suppressed the report.
These Radia tapes should be a gold mine for Indian media to show how things work in New Delhi. The whole issue has come down to Vir Sanghvi and Barkha Dutt. That is not the whole issue.
The arguments forwarded by many media outlets is that the source of the Radia tapes is not known and nobody is sure if they are doctored or not.

That's just the dammed rationalisation. Has any single person disputed the voices on the Radia tapes? No. Has anybody been able to prove that tapes have been edited? No.

Barkha Dutt has written to that effect.

She has written, but what else did you talk about? Is that not clear enough? We can't go by the rationalisation that has been offered.

Another issue that has cropped up relates to privacy.

How many private things in Indian journalism has not been disclosed? Every second day the Indian media is disclosing people's private matters. Only in this matter are they sanctimonious about the Right to Privacy.
Do you think Ratan Tata is right when he says that?

It's a separate matter. The distinction has to be there between private talk and the matter that has impact on public policy that is not covered by the Right to Privacy law. I don't think even Ratan Tata has asked to that effect.

He only says that his private conversation with Radia that relates to personal things should not be leaked. There are personal things like what kind of food he likes etc. But, why should the tapes of his conversations, which are in the public domain, not be heard?

Take the case of WikiLeaks. Is the Indian media reporting or not?
Are they verifying the authenticity of the source? Are they contacting the persons concerned? Are they checking if these cables are edited or not? No.
Yet, they are carrying it. These are arguments manufactured for shutting your eyes.
Do you think the (EM>United Progressive Alliance UPA-2 is increasingly losing its sheen?

The cancer is now in the fourth stage in our governance structure.
It has reached what (writer Malcolm) Gladwell has called the tipping point.
I feel the prime minister has lost complete control of the government. Sonia Gandhi has lost control over the political processes and of the Congress party.
Nobody fears her. Till now, she was the supreme court. The way Congressman feared her, they don't fear her now.
That is why you see how she took time to take action in Andhra, Maharashtra and corruption in the Commonwealth Games. They kept saying the government is not doing anything on the CWG.

There was an sms doing the rounds where someone asked why the government did not act when the country was getting such a bad name? The answer was that nobody told the prime minister that the Games are going on!
Similar is the case of Sonia Gandhi. She has unlimited authority within the Congress, and therefore in the government.
When the country's name was jeopardised, if not the prime minister, she should have acted. Both have lost authority in their respective space.

In May 2009 everything was looking so hopeful and good for the Congress party. Why this transformation?

Because of the tipping point. Things go wrong inside the body and we don't realise.
Second, I have seen during Rajiv Gandhi's time that the prime minister and rulers are often misled by the fact that they control the situation within Parliament. But they don't realise that the situation outside Parliament is going out of their hands.

This is what happened to Rajiv Gandhi. He had three-quarters majority in the House. He thought he controlled everything. He was in control, but things outside Parliament slipped out of his hands. The same things are repeating today.

They must be thinking that we have won. We have managed other smaller parties. The Opposition party is our pocket borough! We have managed them. They were confident of them. Call them for dinner and praise them a little bit in public.
People can be driven by flattery; you don't even need to give them money.
Some small fry could be praised in public. They became instruments in the hands of the government. The government felt cosy in that position. Suddenly things went out of hand.
Do you agree with the BJP's demand for a JPC (Joint Parliamentary Committee to probe the 2G spectrum scam?

The JPC will derail the investigation. The government will get a perfect alibi for two years that the probe would go on.
There were JPCs on Harshad Mehta, Ketan Parekh, insecticides. What happened to them?
If a JPC is formed, then the issue of 2G spectrum will be killed. The CBI (Central Bureau of Investigation is now doing the job.

A Raja is out and there are many indications that they are pursuing the matter. I know from personal knowledge that the CBI has got details of the transactions involving many, many telecom players and Raja.
The best way is for the CBI's investigation to be monitored by the Supreme Court.

'BJP and Congress are one party' : Arun Shourie 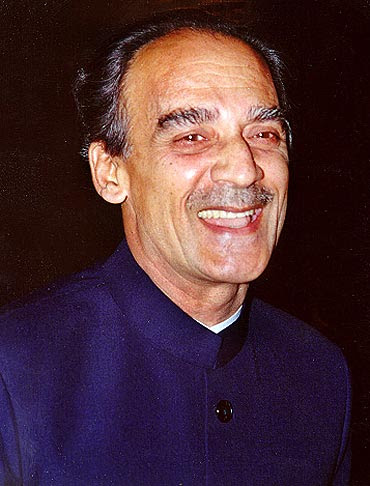