Posted by Explorer at 2:56 AM No comments:

Please act with the urgency of a man whose hair is on fire: Shourie tells PM

A trial court in Delhi has ruled that Home Minister P Chidambaram will not be held criminally liable for the telecom scam that unfolded in India in 2008 when he was Finance Minister. Arun Shourie talks to NDTV and appeals to Prime Minister Manmohan Singh to act with urgency and put the country's affairs in order. 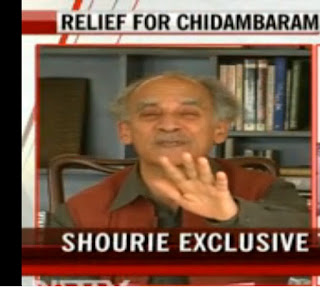 Source: http://www.ndtv.com/video/player/news/please-act-with-the-urgency-of-a-man-whose-hair-is-on-fire-shourie-tells-pm/222940
Posted by Explorer at 2:54 AM No comments:

Arun Shourie Interview with CVR News : A political realignment can be expected if Modi shifts base to Delhi.


In this exclusive interview with CVR News channel, Arun Shourie talks about the possibility of Narendra Modi becoming a potential candidate for Prime Minister in 2014. He feels a political realignment can be expected if Modi shifts base to Delhi. Shourie is certain that Modi's leadership will electrify the BJP cadre across the country.
Posted by Explorer at 2:59 AM No comments:

Arun Shourie: 'PM has for the first time shown his strength'

Talk Back with Arun Shourie

Senior BJP leader Arun Shourie tells Bloomberg UTV's Hindol Sengupta why India will be isolated in Copenhagen
Posted by Explorer at 1:28 AM No comments:


For complete Walk The Talk: NDTV

The Monsoon session of Parliament was a complete washout with the Opposition refusing to let both Houses function over the alleged coal scam. This week on Walk The Talk, senior BJP leader and former union minister Arun Shourie talks about how these disruptions are counter-productive for the country.
Source: http://youtu.be/UsFWBrl1X-4
Posted by Explorer at 1:26 AM No comments:

Strongly disapproving the BJP’s strategy to stall the monsoon session of Parliament over the coal blocks allotment controversy, former telecom minister Arun Shourie has said that such disruptions were counter-productive as they greatly harmed the country. Instead, the main opposition party could have used the session to analyse the allotments and convince the country that it is a responsible group that can govern the country better.
Frequent disruptions have brought Parliament on par with state assemblies and this trend has over the last 20 years played out like the “elongated funeral rites of the parliamentary system”, said Shourie, who has distanced himself from the BJP. “Whenever you paralyse it, whatever be the issue, you are inflicting great harm to the country,” Shourie told Shekhar Gupta, Editor-in-Chief of The Indian Express, in an interview for NDTV’s ‘Walk the Talk’ programme.
“The institution is getting reduced to what state assemblies are like. In state assemblies, the sessions are now of 4-5 days each. So, if you see the effective days of Parliament, it has been already reduced to a level of state assemblies. Can a country like India be run like that?” Shourie asked. “Whatever be the issue,” the opposition should adopt methods that will strengthen institutions like Parliament, he said.
Shourie said he did not find merit in the BJP’s argument that the strategy to disrupt Parliament was a one-off case to bring the coal block allotment controversy to the notice of voters. “One session actually casts a shadow on the institution of Parliament forever,” Shourie said, lamenting the trend of disrupting Parliament in the name of one issue or the other. “Even from the narrow point of view, it is counter productive, in my view...for 15-20 years now, we are attending the elongated funeral rites of the parliamentary system.”
Parliament could also have made use of existing rules to suspend unruly members who protest by rushing to the well of the house, said the author and former newspaper editor. “Just enforce the rules and tire them out. Let the country see them,” Shourie said, referring to the protesting MPs. While disruptions helped the government by diverting attention away from the issue in question, the BJP had very articulate leaders who could have analysed and debated the controversy in Parliament and put the government on the mat, he said.
The BJP should, in fact, use the opportunity to present itself as a credible alternative to the UPA government instead of disrupting Parliament, Shourie said. “You should not worry too much about the government. It is not going to change. It is working full time to prove its worthlessness. The opposition should concentrate on convincing the country that it is a responsible group, that it can govern, that they have better ideas, that they have a better record at implementing these ideas,” Shourie said.
Source: http://www.indianexpress.com/news/arun-shourie-criticises-bjp-for-not-letting-parliament-work/1001867/0
Posted by Explorer at 1:18 AM No comments: